So there's this climb in Potrero called Timewave Zero. It's kind of a big deal. Ever since I first started coming to Potrero in 2005, I had heard about this climb. It's 23 pitches (where a pitch is about 100 feet of climbing), so you end up climbing about 2200 feet to get to the top, and the hardest pitch goes at 5.12a, which if you're not too familiar with climbing grades or the Yosemite Decimal System, 5.12 is a really difficult grade - many, perhaps most, climbers never climb 5.12 or higher in their lifetimes. There is also a much more manageable 5.11a pitch (four letter grades easier), three 5.10ds (one letter grade easier than 5.10d), and a lot of other pitches ranging from 5.7 to 5.10b. But regardless of the grades, 2200 feet of climbing is a LOT. So there's this thing where climbers come to Potrero and they try to climb Timewave Zero in a single day - it's basically a marathon of sport climbing, and an achievement all by itself. And the thing about this climb is that I had always considered it way beyond my capabilities - until this year. 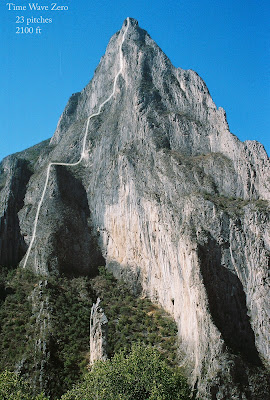 7 pitches to the top of the buttress, 15 pitches on the headwall

So a couple of my friends had paired up with plans to do Timewave Zero, but my friend Felipe didn't have anyone to do it with and he definitely wanted to do it. So for at least a day, he kept trying to convince me to do it with him. I definitely wanted to do it before I left Mexico, but I kinda had plans to do it with another really close friend who was planning to come down later in the month, and it seemed kind of silly to try to do it twice in the span of a week. But in the end, I couldn't resist taking advantage of the good weather and my good health and for some reason I was worried that something would happen between then and later that might somehow prevent an ascent from happening, and when Timewave is on your "40 before 40" list you don't want to accidentally miss your chance and have to wait until your next trip to make an attempt. So in the end I told Felipe that I would climb it with him on Christmas Eve, and then if my other friend still wanted to climb it on New Year's Eve then I would do it then too. Timewave Tuesdays, if you will =)

So we had picked the day, we checked the weather, and we determined our lead plan. To save time, it helps if you and your partner take turns leading pitches because then you don't have to re-stack the rope when the follower reaches the leader - the follower just becomes the new leader for the next pitch and you feed out the rope you just pulled in. You can also save time by "linking" pitches, where the leader leads two pitches at a time, extending nearly the entire length of the rope in the process, which saves time because there's no delay between leading the first pitch and the second and there's less rope to pull. So we made a master plan of who was going to lead and link which pitches the day before. We drank lots of water the night before and went to bed early.

The morning of Christmas Eve, Felipe and I woke up at 4:30am as we had planned. This was a first for me - I don't think I've ever had an "alpine start" in my entire life, but just this once I was willing to do that kind of crazy early morning. We drank some coffee and ate some breakfast, brushed our teeth, grabbed our gear, and started heading out around 5:30am. Only the gate at La Posada was locked. What the heck! Fortunately we managed to find a staff member to unlock the door for us, but we were almost screwed from the get-go. Anyway, we walked out past the Hobo Camp, hiked up past the Spires, and kept hiking in the dark up near the Surf Bowl until we reached the Timewave Buttress. We put our harnesses on in the dark and organized all of our gear and Felipe started leading the first two pitches in the dark at 6:30am with his headlamp attached to his helmet while I belayed him.

The first pitch was easy, 5.7, but the second pitch is 5.11a, which is a pretty stout grade for your second climb of the day especially when it's the early morning and it's not particularly warm, but Felipe managed to lead it just fine and I started following the first two pitches right as it started getting light out but before the first rays of sunshine were upon us. The 11a definitely got my blood flowing as it was a little tricky and pumpy. I then led the next two pitches (5.8 / 5.8) and belayed Felipe up to me, and I believe the sun first hit the wall right as Felipe was starting the next two (5.10a / 5.8). I led the next short 5.7 pitch and we reached a 3rd-class garden walk over to the headwall. We were 7 pitches up in maybe just over two hours. Headwall from the 3rd class garden

Due to the potential for some rope drag with some traversy pitches, I led the next 5.9+ pitch and Felipe led the 5.10b pitch after that. The 10b pitch was one of my favorites on the climb because you end up doing some really fun laybacking / smearing while holding on to underclings in a crack. Super cool! I kept telling Felipe how stoked I was for that particular pitch when I reached him. I then led the next two pitches (5.9 and 5.7) until we reached the bivy ledge on the top of the 12th pitch. At this point we were about 4 hours in. We had a small snack, drank some Gatorade, and dropped off one of the packs at the bivy ledge thinking that we'd have plenty of water in a single Camelbak for the two of us. Then we started up again. 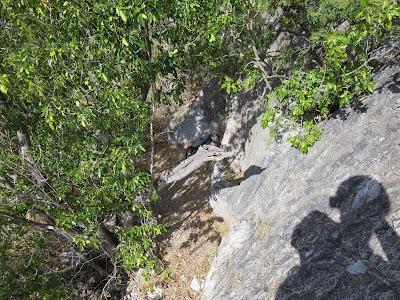 Bivy ledge on top of the 12th pitch 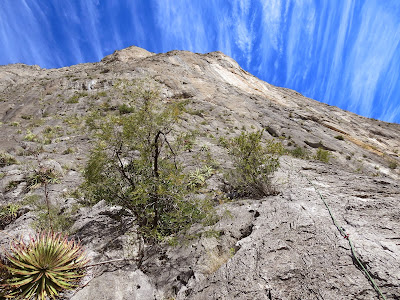 Next was the crux - the 5.12a pitch. Felipe was inspired and decided he was gonna try to get it clean, which I found pretty astonishing because by this point I was pretty tired. After all, we'd already climbed 21 pitches. Felipe climbed up past several bolts and made a valiant effort, but in the end he said "no fucking way" and took a short fall. Then he started using draws and carabiners with slings to use the bolts in such a way to basically aid most of the moves, because the route gets super thin on hands and the feet are basically nonexistent. In not too much time, Felipe had made it to the top on lead, and it was my turn to follow. I had no compunctions whatsoever about cheating my way up by aiding, but I have to say I was even more impressed by how far Felipe got without aiding when I had to climb the route. It's so much harder than it looks from the belay station, and even when I clipped into bolts with my personal anchor and called for takes and stepped into slings, I still struggled and had a really hard time making it up even on toprope. Holy cow. I have no idea how strong I'd have to be to climb this guy free, but it's much stronger than I was. Regardless, our plan was to aid if we needed to because the summit must be reached! 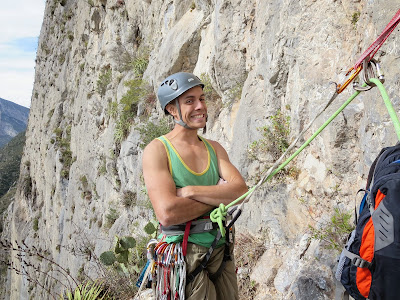 Unsure about the 12a pitch

After the 5.12a pitch we were basically home free. I led the next 5.9 pitch, which was extra difficult because of how tired I was after the last one, and then I stupidly kept climbing to link the next 5.6 pitch. The problem is that the last pitch is basically a long, loose, exposed ridgewalk to the summit and if you try to link it with the previous pitch then the rope drag is extreme. I eventually decided to just stop fifteen feet short of the summit and start belaying and pulling up rope until Felipe started climbing up to me. I swear I had to pull the rope with both hands using a heave-ho motion. Anyway, Felipe eventually reached me and climbed up to the summit and I shortly joined him.

Wow. The summit of Timewave Zero is actually amazing. Look at this: 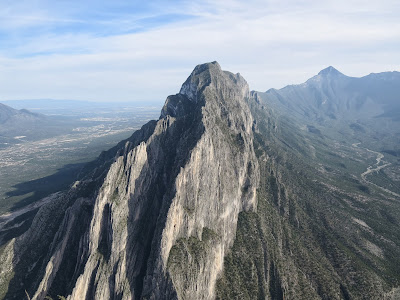 East side from Timewave summit 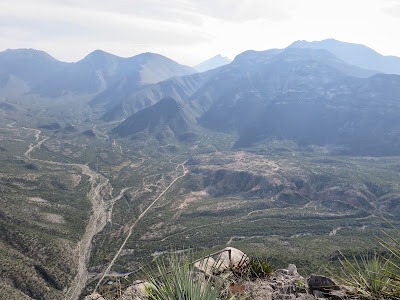 Back of the Potrero canyon 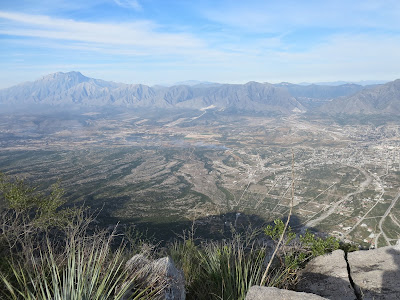 Some of our friends had joked that their claim to fame was doing the Tallest Ascent of Timewave Zero, as they averaged about 6'5 between them, but our claim to fame was the "first mohawk ascent" as we'd both gotten mohawks only a few days before (mostly because we thought it would be funny). 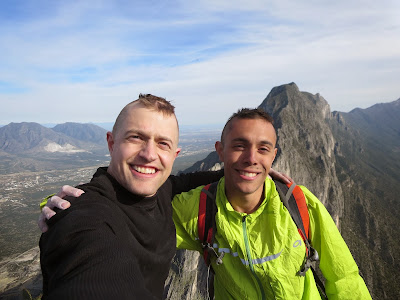 We took a few minutes to enjoy the summit, and celebrate our victory over Timewave, but it was 3:30pm and we realized that we needed to start rappelling if we wanted any chance of reaching the base before it got dark, and rappelling in the dark is not the most fun thing in the world. So we downclimbed the ridgewalk using the fixed line (which was super scary!) and then started rapping down the rest of the route. We were a little slow at first but soon developed a pretty quick and efficient rhythm for rapping back down. We stopped at the bivy ledge to grab our other pack, and then continued back down. We simul-rapped pretty much the entire way, which I think saved us a lot of time, and in the end we made it back to the base around 6:30pm, literally right before we had to turn our headlamps on, so we really squeezed as much value out of the daylight as we could have.

Some of our friends were awesome and dropped us off a caguama (36oz) of beer and some juice, which we were super stoked about, so after packing up our gear and hiking down the semi-sketchy hike to the road, we cracked open the beer and talked about how much we loved the route. It's actually pretty amazing - every single pitch has fun and interesting features, and none of them are boring. The weather had actually been perfect too, a bit chilly near the top with the wind but the relatively low temperature meant we stayed well hydrated all day. All in all it had been a really awesome, really inspiring experience and we were super stoked to have had each other as partners. After that we started calling each other Timewave Heroes, as a joke... mostly =)

(Note: Although I had also planned to climb it on NYE, this turned out not to be fated as the weather turned really sour starting on Christmas Day and my friend was not feeling well enough to want to come down and climb, so sadly it was not to be. But I was definitely super glad to have done it the first time!)
Posted by Hexar Anderson at 12:00 PM